Curves by Intuition (and some experience)

Energized by the good fortune of being able to set up a workshop this summer on a beautiful lake in western Maine, I found the courage to test my understanding of compensation curves used to create digital negatives.  The mountain spring water may be better nourishment for my body (and spirit?) than the city water on the university campus, but the radically different chemistry in the water liked to wash out anything in my images that was less than 50% black.  The standard solution for this problem would be to print a step wedge, analyze the resulting print, and create a correction curve that will stretch the tonal scale to compensate for the odd UV blocking properties of inkjet negatives.  But, this time, I decided to do something less rigorous.  With each image, I manipulated the compensation curve by estimating how much darker/lighter different segments would need to be.  This practice removed many steps in the editing process and forced me to visualize the entire workflow from Photoshop to real printing in the wet darkroom.  After making some big mistakes, I started to get the hang of it, and developed some unique curves for each image.

For the sake of instruction, I ran an experiment in which I applied some of the curves to images for which they were not originally made.  This made for an interesting comparison that reveals what compensation curves are doing.  Below you will see an image chart.  Each row of pictures corresponds with the curve that was applied (screen capture of the curve at the top of each column). 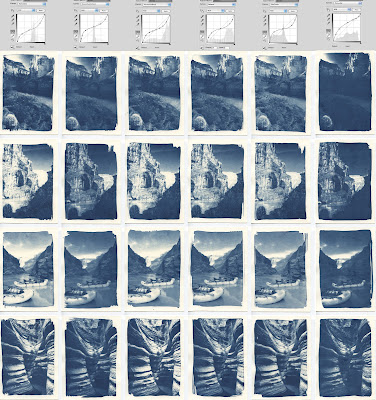