just a summary of the show and sale
some good money was raised, and people got to get some terrific art for cheap
Posted by Scott at 11:34 PM No comments: Links to this post 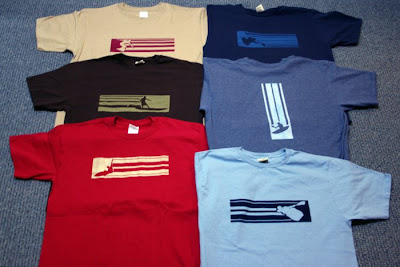 No thought. Just the shirts I want to wear, so I made them. He he he
Posted by Scott at 6:00 PM No comments: Links to this post

A university professor went to visit a famous Zen master. While the master quietly served tea, the professor talked about Zen...

Empty Your Cup
Posted by Scott at 6:23 AM No comments: Links to this post

It's a bit of a rough statement, and really feeds into the grand narrative type of thinking, but it is quite possible that the "post" used to try to differentiate the parent (Modernism) from it's child (postModernism) was doomed from the start.

The problem lies in the reality that postModernism actually replaced Modernism as a grand narrative. The added moniker of "post" just was a random verbal appendage that was catchy enough to have fashionable appeal to both the marketing needs of the gallery system and PHD candidates. Besides, it's always fun to protest the old ways. (too bad the rebellious youth discovers (s)he is the embodiment of the teaching of the previous generation no matter how much rebellion exists)

I don't want to replace postModernism with some other kind of (named/un-named, organized/chaotic) grand narrative. But, I do want to bring attention to the dogmatic nature of ANY movement once it gains momentum. While, initially, someone is only asking questions. Historically, that is what happens. (Hegel would be proudly predicting the next step) But, as soon as an idea is formed, the antithesis arrives.

My thoughts were better in the car. But, upon further reflection, any conclusion is against the point. Words are constricting and oppressive and I don't want to be defined by that against which I rebel (like so many other art movements, including post modernism).

a follow up on last year's travelling helmet art show
http://www.becauserockshurt.com/helmetart.htm
Shred Ready sent out a bunch of white shells of their new standard helmet last winter to various artists and whitewater people. When painted, they were sent back to the factory, where they received all the parts to make them into functional helmets for whitewater river running, surfing, snowboarding, kite-boarding, etc.
A display of helmets travelled the country this past summer and fall.
The sale of these helmets directly benefits American Whitewater, an organization that works to keep rivers flowing open and free.

see more here
Posted by Scott at 10:12 AM No comments: Links to this post

Postcards From The Edge

http://thebody.com/visualaids/current/postcards2008.html
is only one week away

It's a nice benefit for a good cause, and a way to see about 1,500 different pieces of art from 1,500 different artists.
Posted by Scott at 3:24 PM No comments: Links to this post