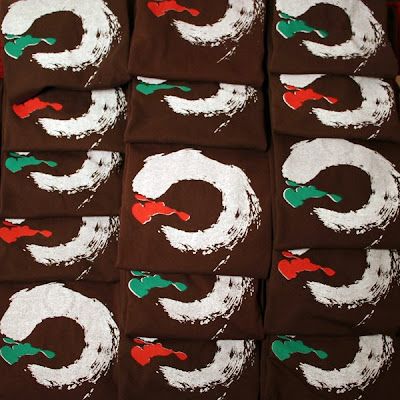 Posted by Scott at 6:18 AM No comments: Links to this post

thinking of both the screen prints and the acrylic paintings....

New Chaotic Order, what is that? other than a title to that blue cycle print I made in September with much difficulty?

It gets me thinking about the repetition of a small matrix to create a slightly disordered sort of random new matrix that is almost 100% repeated, but not completely, and only for a very short time, then probably not reproducable in the future.
I suppose that, in many ways, it's the entropic side of the chaos theory conversation.

Without regard to the verity of the above thought train, it gives me a new idea. Instead of using the same screen in a variety of ways, to make an edition of multiples, I should use a variety of screens, in the same sequence, but placed in a different position on each piece of paper in the suite.

The order of the process will be the same in each iteration, but the collective image on each sheet will be different. It will be an experiment in movement and will. If I position the screens by hand, I cannot possibly make a mark in the same place on each sheet. I can get close but not the same place. It's a demonstration of the failure of will in that respect. But, the intention and effort are will itself. And, when I chose to change the position, to consiously be different, then it's an obvious demonstration of will in a successful (if not simplistic) light.

And yet, if the order of screens, during the process, is the same on each page, as well as the ink, then structure, will, contrast, tension, repetition, accident, chaos, chance, process and time are all discussed in a sort of visual hermeneutics, in which the challenge lies in the progressive translation throughout the process, which will dictate the conditions of every following decision. And, when the suite is finished, the appearance of relationship between the pieces will be obvious, but the degree and specifics of the relationship will be subject to translation.

The best way to explore this, to start the translation, is to make the repetitions that don't mimick each other, pile it on, layer it up cover what happens to get covered and hope the transparency allows ore translation than speculation. Much like the repetition of the acrylic paintings.

For screenprints, I'll make a suite of 21 and use the screens I have now (to start). A new screen might be needed, but I'll let the process dictate that.
Posted by Scott at 7:08 AM No comments: Links to this post 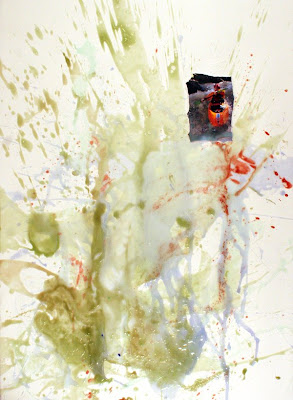 Although this was the last one completed in the series, it shows the inspiration for the 21 paintings/drawings that I made at the end of last year.

I am rebuilding the main Art and Water site, and after nuking a few things by accident, decided to work backwards and build the galleries from slide show to front page. The contact sheet style page for this series is done, along with the slide show of larger versions.

Each one is done on 22" x 30" Rives BFK print paper using thick transparent acrylic paint. It's hard to see in the photos, but the dry paint looks as though it could still be moving when you see it in person.

Now, if I could just find a place to show these for a few weeks and have an excuse to frame them...
Posted by Scott at 7:05 AM No comments: Links to this post 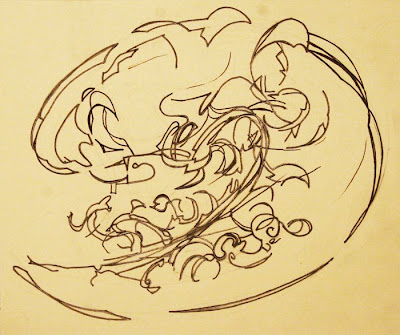 kind of between projects, but feeling the itch, so drawing randomly in front of the TV
I've obviously been working on wave shapes for a long time so it comes out subconsiously
anyway, just for fun
Posted by Scott at 11:42 PM No comments: Links to this post

made as the process of pulling multiple prints starts to get wound up, too tight, and the urge to draw quickly comes to the surface 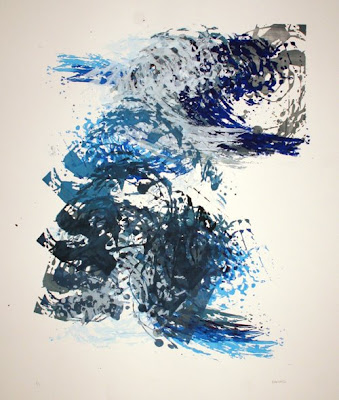 stemming from the fact that I have a load of acrylic ink in a screen, and a desire to paint and compose more loosely, relfecting a less ordered sense of subject while creating a direction of movement that is not cyclical, except, perhaps, in the familiarity of the mark and pattern of gesture 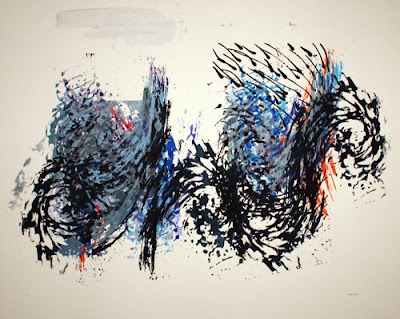 sometimes random, forceful and surrendering to chance, while occasionally lucid and decisive, marks are made quickly so that I may jump on the passing whim and float in unison long enough to capture the fleeting moment before it breaks apart again 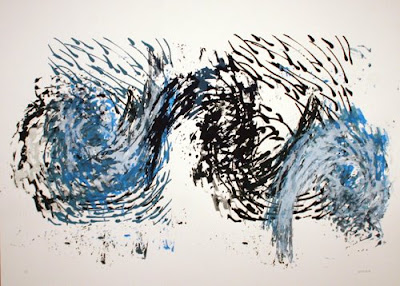 similar intents from different directions
similar forms with different intents
bask in each other's presence, crash, combine, coexist, repel, and resist each other in the inherent tension of motion 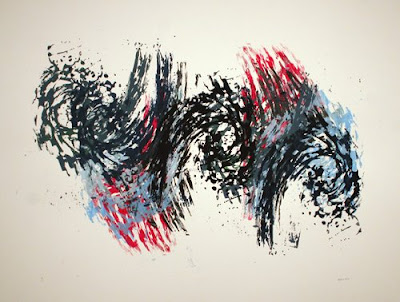 Posted by Scott at 7:57 AM No comments: Links to this post 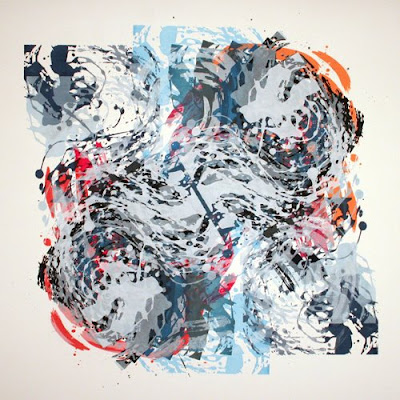 It's the name of the piece (edition of 5) as well as the month of posting.
It's not a coincidence.

The seasons effect abstract work more than observational work. If I were currently painting landscapes, I'd have the option of consciously changing temperature, color, mood. While working with non-observational pieces, in an expressive form, the sub-conscious impact of the given season is unknown until it is already expressed on the paper or canvas. I can't help it until I have seen it expressed.

It is scattered, fractured (probably not fractal), uncertain change in which layer upon layer of transitional states are apparent.
Forms, shapes, patters are both obvious and not.
It is a dream-like state of semi-lucidity whos interpretations must be made loosely without assuming any concrete properties.

It is simply an expression of a collective impression of similar moments and reactions to the last days of November and the first day of December, in which the light is blue, days are short, a dusting of snow barely covers patches of fallen leaves while the gray sky's winds indicate the seasonal change, and the last few degrees of warmth are escaping the rivers' water as it falls and churns while reflecting the steely sky and iron ground of rustling leaves.
Posted by Scott at 8:02 AM No comments: Links to this post 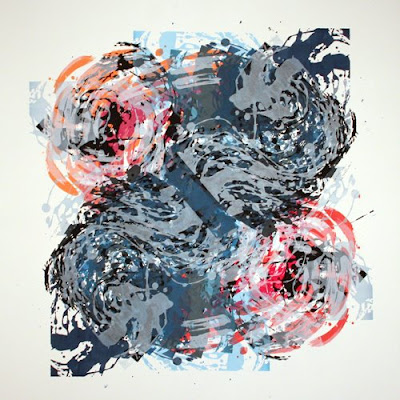 This is a monoprint using screens. Monoprint means that I only made one in this particular configuration. It's what happens sometimes when I get thinking of screenprinting like painting instead of reproducing for the sake of editioning.
Posted by Scott at 1:59 PM No comments: Links to this post