The photopolymer graveur process has become frustrating. I don't know whether I've become more demanding, with a more finely tuned eye for detail, or I'm just hitting some sort of sophomore jinx with a new process. Perhaps some things are not working right this week. I'm encouraged by some of things I've learned while making mistakes, but frustrated that the final result is not right. The photopolymer graveur process is still new to me, but screen printing is not. I've made three attempts at one image with a screen today, with poor results.

I have three options.
1. Should I give up completely?
2. Should I take a long break and come back to the problems later?
3. Should I keep pushing forward, finding a way to turn anger and frustration into determintation?

I am a fan of option #3. It is one that I naturally follow, and a belief that my experience on whitewater (and other outdoor activities) has reinforced. The river will not stop moving. I will make mistakes along the way, but I need to forget them immediately after they happen and keep moving forward. 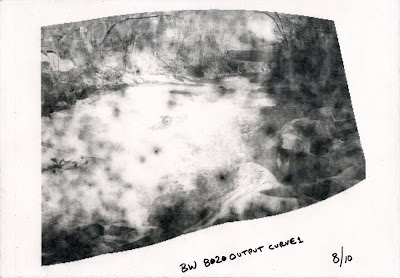 I'm inspired by some of the students in my studio classes. Their frustrated learning curve is palpable, particularly when I hear them let out a big sigh, drop their shoulders, and look away from their drawing. What has encouraged me so much, lately, is the frequency with which the return to their work, trusting the process of looking/drawing/looking/drawing/etc. Their faith in the process, and belief that they will make progress, moves me forward in my own work, and give me faith that I, too, will make progress.

made some progress with the photo gravure 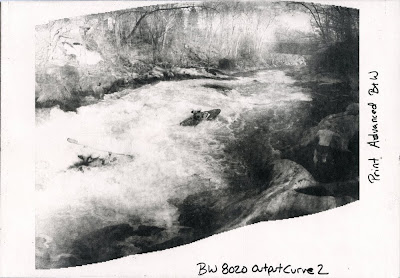 solved the contact problem, mostly...
I admit that I was not as clean as I should have been, so the three pieces of dust tented the transparency enough to lighten up the right side, BUT everything else is looking pretty good, so at least the work flow is good now.

downside is that I still can't make a screen for anything....
I've done so many of these that I can't figure out what I am doing wrong.
It will wait for the weekend. I need a break for now.

update #3:
I have not liked the overall image, and did not trust how much information would be lost with the gravure process, so I decided to do alot of burning and dodging in photoshop. This was all done while clicking the preview filter on and off to predict results.
After a while I decided, since nothing was working perfectly and this was becoming an experimental piece anyway, to push the burn and dodge to extremes, betting on anything above 80% and below 20% blowing out to pure black or white. 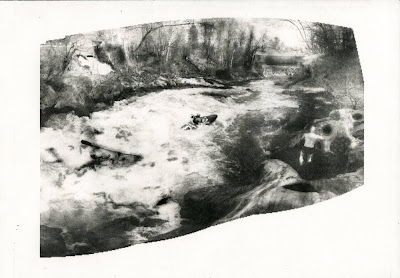 update #4:
This is a good image. Adjustments in Photoshop improved the image. I am learning how the preview curve actually relates to the final product. The transparency/positive was good. The only problem with this plate was a lack of good contact in the lower right corner. I'll clean the glass on the exposure unit and the print frame before plate #5. 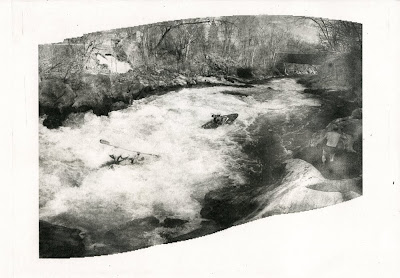 update #5:
This is the final image.
Contact with the frame was good.
I dried the transparency with a hair dryer to make sure it did not contain any moisture.
I had taken the advice of a friend and sprayed the back of my positive/transparency with matte medium to eliminate Newton's Rings. The same person discovered why baby powder was useful in this process. Brush it on the plate, then brush it off. The super thin residual film of talc will create just enough space for gas and water vapor to escape during exposure. Talc is fine enough to not act like dust and create exposure issues. I imagine that using baby powder would make my results even more predictable. 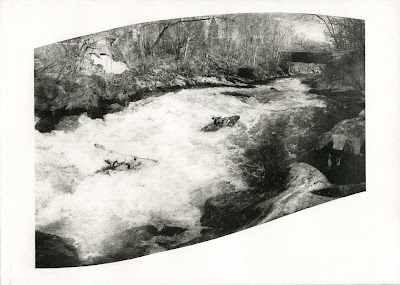 Here are the plates in order, for easier comparison.

http://artandwater.blogspot.com/2010/05/better-look.html
Posted by Scott at 5:03 PM No comments: Links to this post