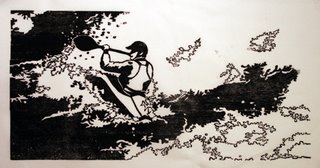 Someone had asked me to make a woodcut from a photo of James on corner wave. Unfortunatley the request came at a time when I was super busy and grad school was looming over my head. I HAD started the print, but it took until most of the way through grad school to find a bit of time to finish it. And, I just found it with lots of other grad school work.

It's a woodcut, using mahogony that I recycled and glued together for the printing block. This is the only print, but I think that it would only be fair to make a copy for James and for Sean. 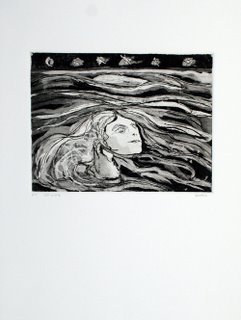 this is a later generation of the print that was handcolored.
after only making 5 of the earlier version to color with watercolor, I made some modifications to the zinc printing plate using aquatint and this is the result.
There are only 12 in this series, and that is all that can be made.
Posted by Scott at 2:25 PM No comments: Links to this post

"over the edge" series

I also sometimes referred to this stuff as "horizon" series, but "over the edge" more accuarately captures the intent of thinking about that moment that happens just at the lip of the horizon... 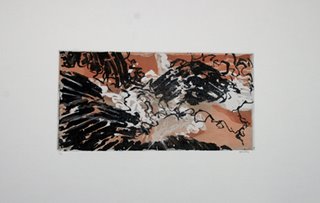 this is an etching/aquatint and is one of four done like this using two different zinc printing plates. Each one of the four is a slightly different color somewhere between this orange/red/fleshy tone and a more yellow tint. The image itself is about 6"x12" with the overall paper size approx. 12"x18"
The intent was to show how converging currents meet at a falls. Look closely and you'll see that the background color (the second printing plate) is a waterfall style image also 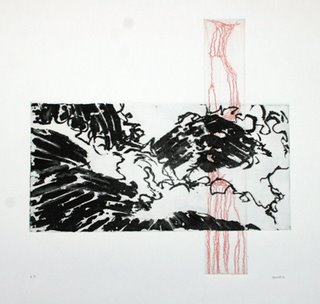 This is also an etching and aquatint. I, personally, think that this one worked out a bit better in communicating both the "over the edge" theme with an overlapping stream. I am a big fan of Japanese woodcuts and though it would a bit of a challenge to give a small tip of the hat to the style while using a different printing medium.
The paper size is a little less than 18"x18" with each printing plate (therfore image) is about 12" long

this started as an underpainting,and the bubbly water worked so well immediately, and I just loved the powerful, confident brush strokes of the falls so much that I had to stop and realize that it was done.
12"x24" oil on canvas 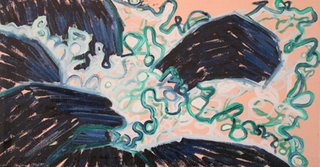 purposely using a flesh tone as I thought about the vulnerability of the flesh while going over one of these horizon lines, but also the close, intimate relationship between flesh and water
12"x24" oil on canvas 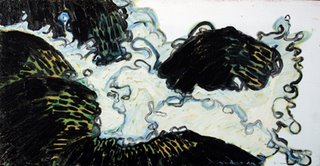 I left the canvas blank in the corner as a means to think about the unknown element in a waterfall/horizon line. A super simple thought process here: I literally was imagining boofing into the unknown.
12"x24" oil on canvas
Posted by Scott at 2:16 PM No comments: Links to this post

back to the painting board....

I've started painting again after a summer of photography and some drawing. I feel a bit rusty and restrained, but I'm sure that I'll shake that in a couple more paintings. Here are two small works (4"x12") that I made one night when I could not sleep.

This is an oil, mimicking the drawing techniques I was using last winter for the 100 WAVES series. Oil tends to get a little more muddy than ink if I work to fast, but in this instance I enjoy the more somber tones.

This is another oil in which I started like the one above, but it just wasn't working, wasn't capturing the feel of water or a wave like I wanted it to, so I switched the colors and used a knife to squish the paint around in the motion of a wave. I think the success here is how the paint that sqeezed out from the side of the knife reminds me of water. Pretty easy considering that the paint is a super viscous liquid....
This little painting has influenced the way I am thinking about the acrylic pieces I started last winter. I stretched two canvases and will experiment with what I learned (in the acrylic project)
Posted by Scott at 9:00 PM 1 comment: Links to this post 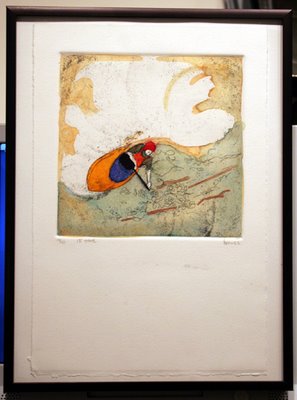 of course being a superhero and throwing down a big giant blunt off the lip of a huge wave is a fantasy. Sometimes a reality. 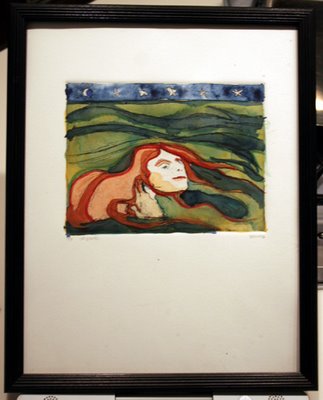 Edvard Munch was a bit of a freak about women, and certainly a product of his time. But, a contemporary reading of the same image, recreated through the filter of the warm embrace of floating in a calmly moving summer stream makes me think of the woman's hair that wraps around her lover as a welcomed sensation.


both of these are etching that have been hand colored with water color paint
Posted by Scott at 12:20 AM No comments: Links to this post 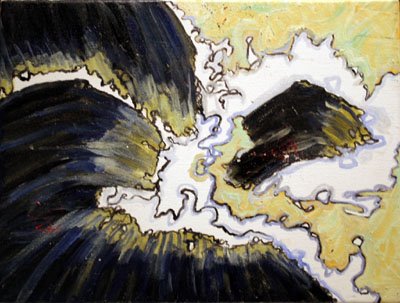 12" x 16"
this is an oil that is part what I had called the "over the edge" series, in which I explored the horizon line as seen by whitewater boaters just before they fall over a big drop or waterfall. I tried to capture the feeling of anticipation, the turbulent movement of water, and the heightened sense of being while paddling difficult whitewater in which a kayaker feels both very human as well as like a superhero

24" x 48"
this is one oil painting of several I made about one of my favorite surf spots on a river. I used lots of red as an excited color as well as the naples yellow to give a little bit of sense of the flesh, how we need to protect it from cold water, and how wonderful the sensation of warm water is against the skin, especially when floating a playing in it. The overall impression from far away is a kind of peach tone, which also is fleshy, so I (unofficially) refer to this one as "Georgia Peach" 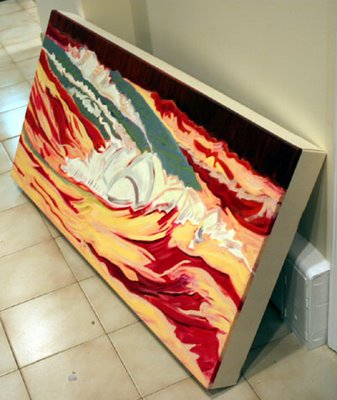 Just a view to show the 4" stretchers and how far this piece pushed out from the wall. I like the raw canvas on the side because it is a less proccessed look and matches many different surfaces against which it hangs. Also a bit of the raw canvass/ naked skin thing going on here...

6" x 12"
I struggle and struggle with water color, and only recently have begun to feel a little more free with the medium as I just surrender to it and draw as I know how to draw.
Another water scene, sunset colors, turbulent hole/wave, transparent yet powerful froth
It is very much a point of view from the same level as the surface of this feature, looking at the mound that is a horizon line into the "v" sweet spot.
Posted by Scott at 12:05 AM 1 comment: Links to this post