I'm exploring exposure options, and can see the merits of multiple versions, but I might be too close to the process right now to make a judgement on the final image. So, which one do you prefer? Why? 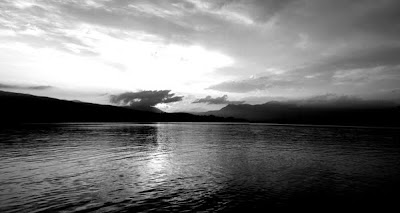 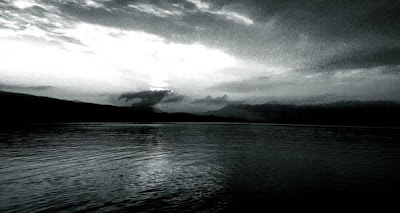 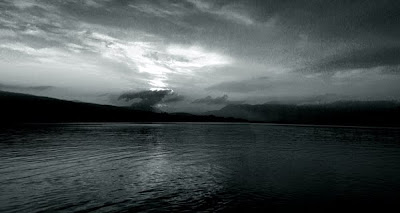 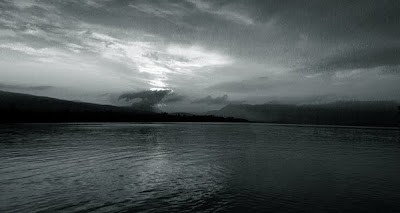 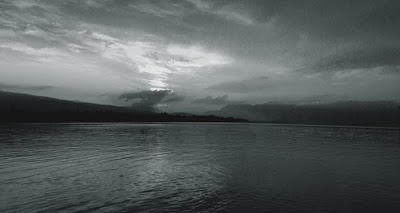 Posted by Scott at 12:38 AM No comments: Links to this post 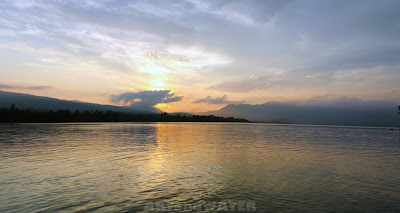 Posted by Scott at 8:56 PM No comments: Links to this post 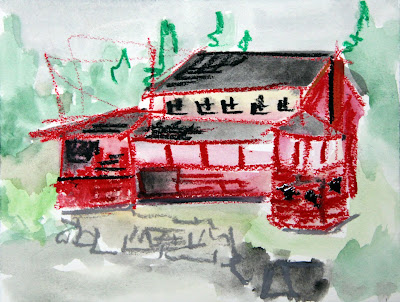 I decided to change things up a bit this year for the Camp Kawanhee group out on the island by adding a more playful technique (hoping to keep the interest of some very active kids as they wait for their turn to go fishing with Captain Chris Cash. 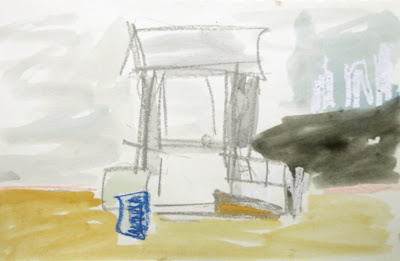 Combining watercolor and oil pastel created interesting effects, and gave the kids confidence to just draw what they saw in front of them. 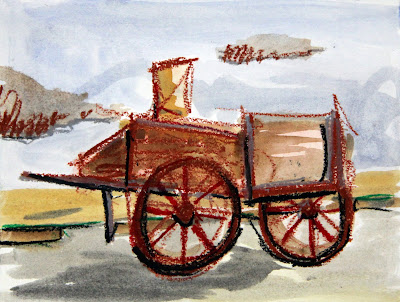 These 4 images are my 5 min demos, made at the beginning of each 2 hour session. 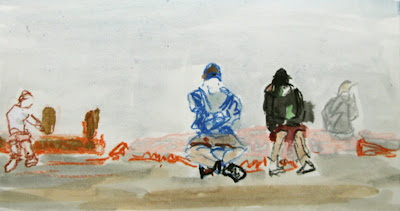 The campers' work can be found by surfing over to the camp's weekly newsletter website http://www.kawanhee.com/wigwam/ewigwam_issue_04.pdf
Posted by Scott at 11:44 PM No comments: Links to this post

"...
To accomplis his object Ahab must use tools; and of ll tools used in the shadow of the moon, men are most apt to get out of order. He knew, for example, that however magnetic his ascendency in some respects was over Starbuck, yet that ascendency did not cover the complete spiritual many any more than mere corporeal superiority involves intellectual mastership; for to the purely spiritual, the intellectual but stand in a sort of corporeal relation. Starbuck's body and Starbuck's coerced will were Ahab's, so long as Ahab kept his magnet at Starbuck's brain; still he knew that for all this the chief mate, in his soul, abhorred his captain's quest ,and could he, would joyfully disintegrate himself from it, or even frustrate it. It might be that a long interval would elapes ere the White Whale was seen. During that long interval Starbck would even be apt to fall into open relapses of rebellion against his captain's leadership, unless some ordinary, prudential, circumstantial influences were brought to bear upon him. Not only that, but the subtle insanity of Ahab respecting Moby Dick was noway more significantly manifested than in is superlative sense and shrewdness in foreseeing that, for the present, the hun should in some way be stripped of that strange imaginative impiousness which naturally invested it; that the full terror of the voyage must be kept withdrawn into the obscure background (for few men's courage is proof against protracted meditation unrelieved by action); that when they stood their long night watches, his officers and men must have some nearer things to think of than Moby Dick. For however eagerly and impetuously the savage crew had hailed the announcement of his quest; yet all sailors of all sorts are more or less capricious and unreliable--they live in the varying outer weather, and they inhale its fickleness--and when retained for any object remote and blank in the pursuit, however promissory of life and passion in the end, it is above all things requisite that temporary interests and employment should intervene and hold them healthily suspended for the final dash.
Nor was Ahab unmindful of another thing. In times of strong emotion mankind disdain all base considerations; but such times are evanescent."
--- "Moby Dick (or The Whale)"
by Herman Melville
1992 Modern Library Edition
Copyright 1930 by R.R. Donnelly and Sons
Copyright renewed 1958 by Rockwell Kent
ISBN 0-679-60010-8
pp. 306-308
Posted by Scott at 6:03 AM No comments: Links to this post

Posted by Scott at 11:10 PM No comments: Links to this post