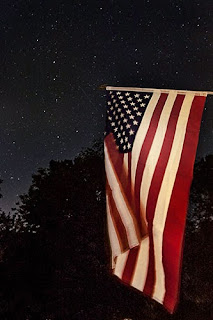 http://en.wikipedia.org/wiki/Memorial_Day
Posted by Scott at 5:30 AM No comments: Links to this post 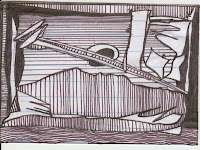 The challenge with teaching classes in which most of the students are not pursuing art as a career is getting them to learn the language of art. 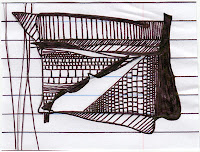 Teaching formal issues forces me to think as a formalist, a modernist, a designer, sometimes a structuralist, but rarely a post - anything. 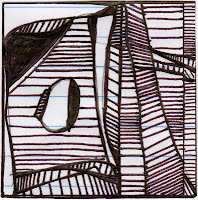 The closest I get to post-modern instruction is the ethos of inclusion and eclecticism.  I tread cautiously because the students can't make an immediate leap to that world.  Their development is often at a stage in which most of them run the risk of translating that sensibility into the over-simplified maxim of "anything goes.  It is a lazy statement that prevents them from understanding the goal of genuine aesthetic exploration.  A foundation must be laid, and that foundation rests in modernism/formalism. 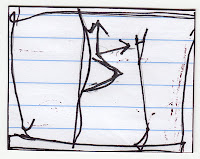 Since these non-majors often have very little skill of hand (more and more students each year suffer from this lack of skill), much of my time is spent encouraging to put down their mobile devices and move some kind of mark-making device on a page.

The digital age has made communication easier.  An unfortunate side effect has been a decrease in content producers and an incredible increase in content consumers.  Sadly, most of the people involved in the digital universe think they are producers when they are, in fact, consumers who are simply repeating the message of the original producers.

How does one become a producer and not only a consumer?  The process is hidden to most people.  Art can become a way to discover the process of producing something unique.  Even the simplest marks in the margins of a notebook can be developed into something unique.  I encourage doodles, wandering lines, random pattern and tone, with any tool which can make a mark. 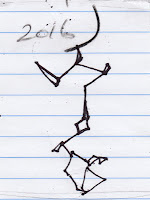 The only effective way to gain an understanding of how to bring an idea from concept to completion is by gaining thousands of hours of experience making mistakes that reveal the giant gap between concept and completion.  Even after learning to control as many variable as possible, in the process of making anything, one really is doing less to control the situation and more to anticipate the multitude of mistakes that are bound to happen.  In short, repeat a bunch of unintended mistakes and one can begin to predict those mistakes.  Those mistakes might be part of a larger disaster, or they might become part of a developing unique style.

I asked this semester's printmaking class to make 10 drawings each week.  The request initially scared many of the students, even after I used drawings similar to those immediately surrounding this text.  After a couple of weeks of encouraging doodles, automatic drawings, and using examples made by my 2nd and 3rd grade niece and nephew, most of the student started to move a pencil across the page each week. 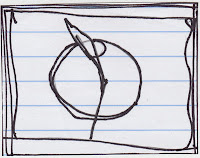 The challenge was becoming a cheerleader so the students would continue to draw what came to them, without their hard-wired internal images of "good" art.

Landscapes were simple:  horizon, near, far, large, and small. 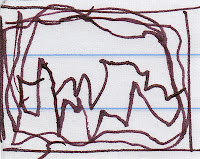 Overlap needed to be addressed.


All formal issues needed to be addressed....... 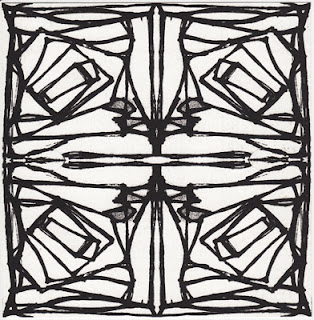 From the scribbles, doodles, automatic drawings, I did some exercises in Photoshop, selecting favorite sections of drawings, and tiling them in a sort of freeze-frame kaleidoscopic patterning. 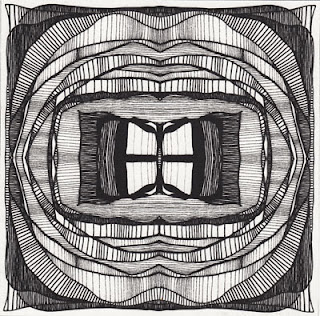 These quadrants and octants ordered the most non-geometric drawings, 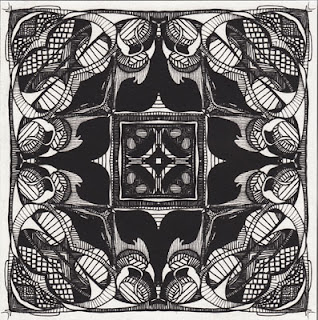 and added a complexity that created new patterns and invigorated interest in both viewer and new artist. 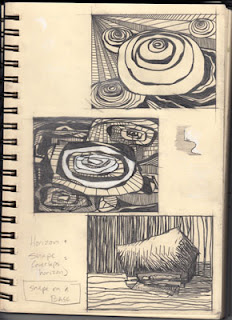 This page shows how I instructed students to set up their sketchbooks.  Each box is barely 2 x 3 inches.  The drawings are more developed that the initial weekly 10 drawings.  As the semester moved forward, I instructed some students to re-investigate earlier simple drawings to develop them with tone and line complexity. 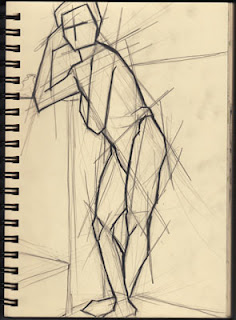 Since I seem to teach Life Drawing every semester, I decided to make some demonstrations that simplified the process.  While many schools of instruction seem to lean heavily on proportion (using the model's head as unit of measure), I have found that introducing the measurement of angle to be a much simpler instruction tool as well as a more effective entry into observational drawing (for most of the beginner-level students). 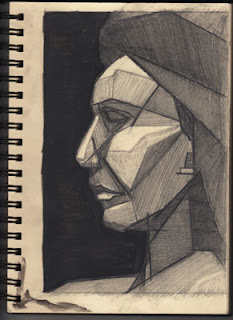 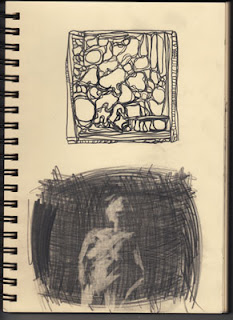 The following four sketchbook pages are included to round out this blog post on instruction. 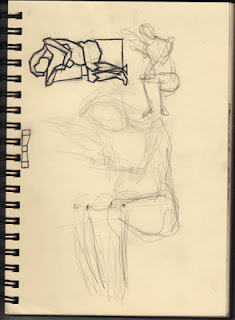 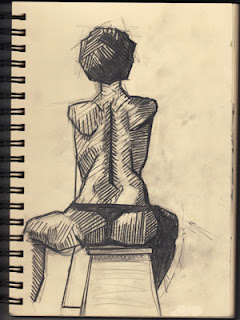 
and the development of shadow impressions and modulation of gray tones. 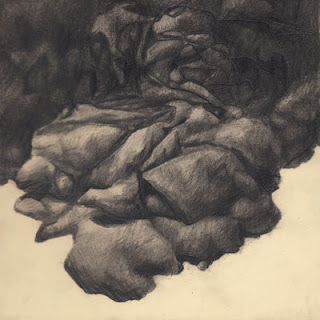