"Call me Ishmael. Some years ago - never mind how long precisely - having little or no money in my purse, and nothing particular to interest me on shore, I thought I would sail about a little and see the water part of the world. It is a way I have of driving off the spleen, and regulating the circulation. Whenever I find myself growing grim about the mouth; whenever it is a damp, drizzly November in my soul; whenever I find myself involuntarily pausing before coffin warehouses, and bringing up the rear of every funeral I meet; and especially whenever my hypos get such an upper hand of me, that it requires a strong moral principle to prevent me from deliberately stepping into the street, and methodically knocking people's hats off - then, I account it high time to get to sea as soon as I can. This is my substitute for pistol and ball. With a philosophical flourish Cato throws himself upon his sword; I quietly take to the ship. There is nothing surprising in this. If they but knew it, almost all men in their degree, some time or other, cherish very nearly the same feelings toward the ocean with me.

There now is your insular city of the Manhattoes, belted round by wharves as Indian isles by coral reefs - commerce surrounds it with her surf. Right and left, the streets take you waterward. Its extreme down-town is the battery, where that noble mole is washed by waves, and cooled by breezes, which a few hours previous were out of sight of land. Look at the crowds of water-gazers there.

Circumambulate the city on a dreamy Sabbath afternoon. Go from Corlears Hook to Coenties Slip, and from thence, by Whitehall, northward. What do you see? - Posted like silent sentinels all around the town, stand thousands upon thousands of mortal men fixed in ocean reveries. Some leaning against the spiles; some seated upon the pier-heads; some looking over the bulwarks of ships from China; some high aloft in the rigging, as if striving to get a still better seaward peep. But these are all landsmen; of week days pent up in lath and plaster - tied to counters, nailed to benches, clinched to desks. How then is this? Are the green fields gone? What do they here?

But look! here come more crowds, pacing straight for the water, and seemingly bound for a dive. Strange! Nothing will content them but the extremest limit of the land; loitering under the shady lee of yonder warehouses will not suffice. No. They must get just as nigh the water as they possibly can without falling in. And there they stand - miles of them - leagues. Inlanders all, they come from lanes and allys, streets and avenues - north, east, south, and west. yet here they all unite. Tell me, does the magnetic virtue of the needles of the compasses of all those ships attract them thither?

Once more. Say, you are in the country; in some high land of lakes. Take almost any path you please, and ten to one it carries you down in a dale, and leaves you there by a pool in the stream. There is magic in it. Let the most absent-minded of men be plunged in his deepest reveries - stand that man on his legs, set his feet a-going, and he will infallibly lead you to water, if water there be in all that region. Should you ever be athirst in the great American desert, try this experiment, if you caravan happen to be supplied with a metaphysical professor. Yes, as every one knows, meditation and water are wedded for ever.

But here is an artist. he desires to paint you the dreamiest, shadiest, quietest, most enchanting bit of romantic landscape in all the valley of the Saco. What is the chief element he employs? There stand his trees, each with a hollow trunk, as if a hermit and a crucifix were within; and here sleeps his meadow ,and there sleep his cattle; and up from yonder cottage goes a sleepy smoke. Deep into distant woodlands winds a mazy way, reaching to overlapping spurs of mountains bathed in their hill-side blue. But though the picture lies thus tranced, and though this pine-tree shakes down its sighs like leaves upon this shepherd's head, yet all were vain, unless the shepherd's eye were fixed upon the magic stream before him. "

pp. 1 -3
Moby Dick or The Whale
by Herman Melville
Posted by Scott at 6:00 AM No comments: Links to this post

this is just the beginning (because I am just beginning)...
below is the original digital image collage, converted to grayscale, but otherwise untouched/unadjusted 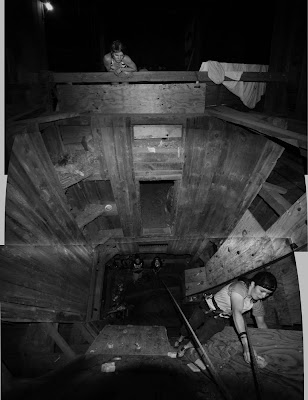 photopolymer graveur (aquatint, "safe" etching, whatever you call it) will drop out values above 80% and below 20%. In other words at those points the value will go right to black or white. So, the grayscale really only runs between the two, in the middle ground, and is not subtle at all towards the end of the scale. (I have been told this is mostly true for the original Photo Graveur, and had to be addressed. Difference in this process is that most of the adjustment is on the computer and not the development process)

I have seen a couple of curves claiming to solve this issue, but they (in my opinion) only work at the cost of some variety in the middle of the scale. I suspect this is because they are trying to bring up values that are not there.

The best thing I have discovered (to date) is the simple idea of getting a reliable preview. No matter how much you adjust your image, it is difficult to guess how much information will be lost. So, when you think you are ready to go, I'd suggest adding on more adjustment layer, and moving the sliders over from 0 to 20, and from 100 to 80. Check out the results...
below is the adjusted image: it is the first (above) image, with the curves adjusted at 20 and 80 as a way for me to preview my results from the polymer plate. 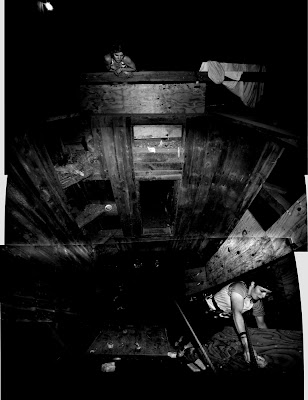 below is the actual printed image from a KM73 photopolymer plate.
There is a bit of information loss in the scan, but this is a pretty representation of what it looks like. 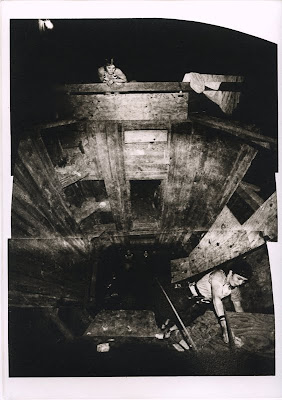 Top image is the original, and the one I printed on a high quality transparency (Pictorico), and used to expose the KM73 photopolymer plate.

Middle image is the top image, with an adjustment layer (Curves) over it, sliders moved from 0 to 20 and from 100 to 80 to get a preview of how the image will look from the KM73 plate, knowing that information is lost above 80 and below 20. It is only a way to get a sort of soft proof, to make sure I am on the right track.
No matter how I adjust the image before printing to the transparency, I want to do this preview before printing to see if it will be satisfactory.
BE SURE TO UNDO THIS STEP BEFORE YOU PRINT!!! It is a preview technique only.